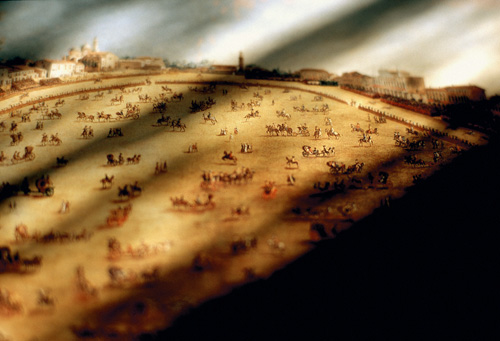 Marco Campanini was born in Parma on 13th April 1981. He graduated in Aesthetic philosophy from the University of Parma; his dissertation was entitled The aesthetics of “visibility” in Italo Calvino and Giulio Paolini. He has exhibited at a range of both solo and group exhibitions in Italy and abroad. His personal exhibitions include “Prime Visioni” curated by Luigi Fassi at Vitamin Arte Contemporanea, Turin, in 2005; “Grand Tour” curated by Daniele De Luigi and Alfredo Sigolo at the Sala Celio, Rovigo, in 2006; “Isolario”, curated by Daniele De Luigi at Galleria 42 Contemporaneo, Modena, in 2007; and “Collezione di Sabbia”, curated by Luigi Fassi at Fotografia Italiana arte contemporanea, Milan, in 2008. His exhibitions include “Italia, 1946-2006. Dalla Ricostruzione al Nuovo Millennio” curated by CRAF, the Photography Archiving and Research Centre, at the Pordenone Exhibition Centre in 2006, at the J. D. Carrier Art Gallery, Columbus Centre, Toronto, at the Metro Center, Toronto, and in Washington, Berlin and Halle; “La terra e le nuvole. Fotografia italiana da Ghirri a oggi” curated by Walter Guadagnini at Unicredit Private Banking, Milan, in 2006; “Ereditare il paesaggio” curated by Giovanna Calvenzi and Maddalena d’Alfonso at the Ara Pacis Museum, Rome, and at the Museum of Biella, Biella, in 2007. The quality of his work has been officially recognised on a number of occasions. He won the “PagineBianche d’Autore” prize 2005-2006 for the Emilia Romagna region, a competition sponsored by Seat Pagine Gialle S.p.A.; the “Menotrenta” prize at “Linguaggi a Confronto”, the National Meeting of Young Artists in Savigliano (CN); and the “1st Fotografia Italiana arte contemporanea prize”, Milan, in 2006. His photographs have been published in a host of publications and are part of both public and private collections include the Unicredit collection, the MIFAV collection (Museum of Photographic Images and Visual Arts) in Rome, and the Panizzi Library collection in Reggio Emilia.